A while back, we had dinner at one of Mario Batali’s newest restaurants in New York City, Manzo. It’s actually inside of Eataly, but is a sit-down restaurant which takes reservations. Manzo is all about meat, and pretty much every item on the menu has a meat component, so this definitely has potential to become one of Bryan’s favorite places.

The meal we had was great – and what really stood out was YiRan’s meal, Tajarin al Sugo di Arrosto. We had never seen this before, but were intrigued by the description on the menu and the waitress’s excitement for the dish. Tajarin are a type of pasta, short mini tagliatelle, and the Sugo di Arrosto is the sauce of the drippings of a roast. We decided to try and pull this off on our own after a visit to the farmers market. There are actually very few recipes for this dish online, so we kind of had to create it from our memory. Fortunately, it came out pretty well, but ended up being a lot of work. So if you’re adventurous and patient…read on 🙂

To start we needed to roast something to get our drippings. We asked the meat guy at the farmers market what cut would be best for maximum drippings in the least amount of time. We decided on beef short rib. This isn’t our favorite cut of meat for most dishes, since it doesn’t actually yield that much meat and is quite fatty, but for this dish, it actually works out quite well.

We placed the browned short rib onto a piece of foil and drizzled more olive oil over it, as well as some additional seasonings and a bay leaf. Then we folded the foil over the short rib and put it in a preheated oven at 350 degrees. We left it in there for about 45 minutes until the short rib had mostly roasted and a lot of drippings had accumulated.

We poured the drippings into a small saucepan, and then started braising the short rib in the pot we had used when browning the rib initially. Into that pot we poured a few cups of beef stock and a cup of red wine, brought the whole thing to a boil, and then covered and simmered for another hour and a half. 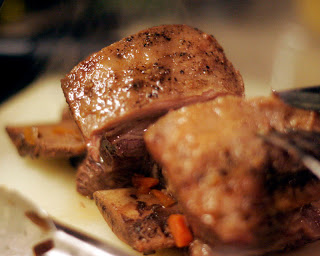 By this time, we were starving, and the house was smelling delicious, and the meat was juicy and succulent. We took it out of the braising liquid and started separating out the meat from the rib and the fat.

In the pot with the drippings, we added a tablespoon of garlic butter and a tablespoon of butter, and whisked everything together. We added a half cup of the braising liquid, and whisked that in as well, and then over low heat let everything reduce for about 10 minutes.
Finally, we cooked the pasta until it was nicely al dente. When it was finished, we drained it and added the dripping sauce and the braised short rib onto the pasta, as well as some sliced scallions, and tossed until the pasta was well coated. We served it with grated parmesan on top.

The Result
This actually tasted quite a bit like what we were looking to recreate. The sauce was light but flavorful, and the beef was quite savory.

That said, this sort of thing is probably a lot easier for a place like Manzo to pull off, where they have beef roasts going all the time and more drippings than they can handle, than our little kitchen and our little short rib. It’s a lot of work. The outcome is certainly unique, and it’s worth a try if you’re adventurous, but this isn’t one we’ll likely be doing again in the near future.