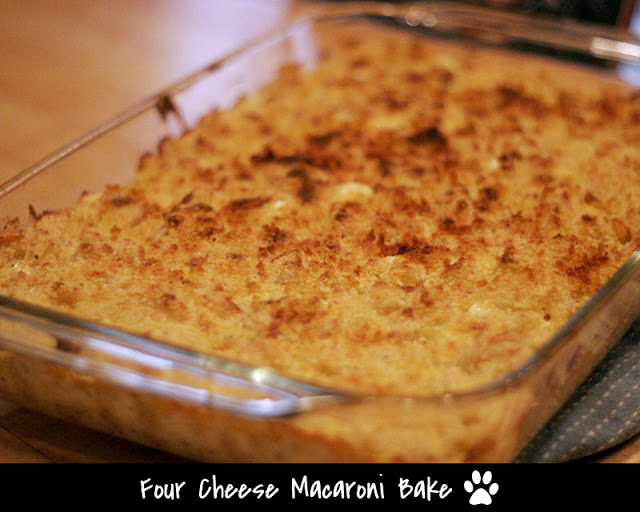 We’ve got our brisket smoking and have indulged in our tasty fried eggplant appetizer. Now it’s time to whip up the side dishes for the brisket. We’ll start with a delicious four cheese macaroni bake (gourmet mac and cheese), and couple it with a side of barbeque baked beans, and tangy sweet tomato cucumber salad. All together, you’ve got a nicely balanced meal of protein, carbs, veggies, beans, and lots and lots of cheese.

The Macaroni Bake
We made macaroni and cheese once earlier, and this version is significantly better. The basic elements are all the same, but this one was improved by a delicious cheese mixture which included creamy mascarpone, the perfect mac and cheese noodle form, and a crispy breadcrumb topping.

To start the dish off, get the macaroni going and cooked until about two minutes short of the package directions. Previously we used shells. Elbows are also a good option. But the best of the best is cavatappi. Cavatappi is a long noodle, almost as if two or three elbows were strung together. This creates a higher surface area to cheese sauce ratio which, in our opinion, improves the overall experience.

While the noodles are cooking, make the roux. Melt the butter over medium heat and whisk in the flour. Whisk it vigorously so that it gets combined well and then cook briefly. Then, add in the milk. We used whole milk, which provides a good balance of fat and flavor, without going overboard. You could use heavy cream if you want it to really taste delicious, but it may also give you a heart attack.

Whisking the milk in over heat requires a lot of effort to make sure that all the clumps go away, but by the time you’re done, you should have a nice smooth creamy looking base. You can season this with salt and pepper, and any other additional herbs. We used a touch of dry basil and oregano, as well as some cayenne and a hint of paprika to give it a somewhat smokey flavor.

Into the base, add in the cheese. Our four cheeses were cheddar (regular yellow cheddar and an extra sharp white cheddar), fontina, pecorino romano, and mascarpone. Add them in equal amounts, about 2/3 of a cup each, and then whisk the sauce together until everything is melted and well blended. Then season with salt, pepper, and herbs to taste.

Drain the noodles and add them into the cheese sauce, then toss everything together until it’s coated. Put everything into a baking dish, and cover with panko bread crumbs. If you don’t have panko bread crumbs available, skip this step, because it won’t crisp well enough and you’ll be underwhelmed. Pop it into an oven at 350 degrees and let it bake for about 15 – 20 minutes, until the top is nicely browned and the sauce is bubbling.

The Beans
Grab two large cans of Bush’s original baked beans, and drain all the non-bean stuff out of the can, as well as the big fake looking piece of bacon. In a sauce pan, heat up some olive oil and add in chopped onion, green bell pepper, and garlic, and sauté until the veggies are very soft, but not browned.

Add the drained beans into the veggie mix and stir everything together. Then go to town with the barbeque herbs and spices. Add in about a half cup of barbeque sauce, a quarter cup of spicy brown mustard, a teaspoon of cajun seasoning, salt, pepper, cayenne, paprika, chipotle chile powder, brown sugar, and a touch of honey.

Lots of stuff in there, and it’s delicious. Stir everything together until it’s nicely incorporated, and then cover and simmer for as short as 15 minutes to as long as an hour. They’ll just get better and better the longer you season them, so long as you don’t have the heat up that high that it makes the bottom burn. Continue to stir occasionally, and taste and adjust seasonings if necessary. 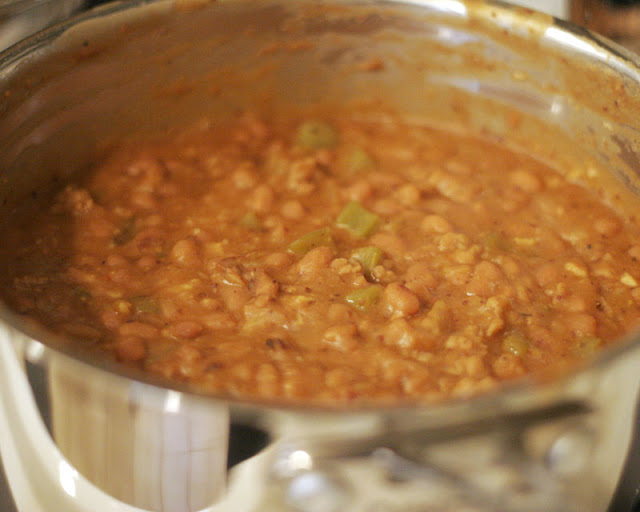 The Tomato Cucumber Salad
This is a simple yet delicious mix of veggies. Grab your cucumbers and peel off their skin. Then, quarter and slice, so you have little pizza pie shapes of cucumber. Throw em in a bowl. Into the same bowl, dice up your plum tomatoes.

A smaller dice is better, but don’t get too carried away of it could take a while. Then take half a red onion and dice that up as well, and add it to the mix. Lastly, dice up a bunch of basil and toss that in the bowl.

To make the dressing, combine olive oil with a touch of red wine vinegar. Mix in some salt, sugar, black pepper, and oregano, and whisk together until it’s emulsified. Then, pour this over your veggies and toss to coat. Taste and season with salt, pepper, or sugar if needed. It should be a little tangy and a little sweet. Cover it and chill for about 30 minutes prior to serving to give the veggies a chance to marinate with the dressing.

The Result
Finally it’s time to eat! The brisket has finished its low and slow cooking adventure, and all the sides are done.

Scoop on a heaping helpful of the macaroni and cheese, a large spoonful of the beans, and enough of the veggies to keep you satisfied and then pile on the brisket. All together you’ve got yourself the perfect barbeque meal. 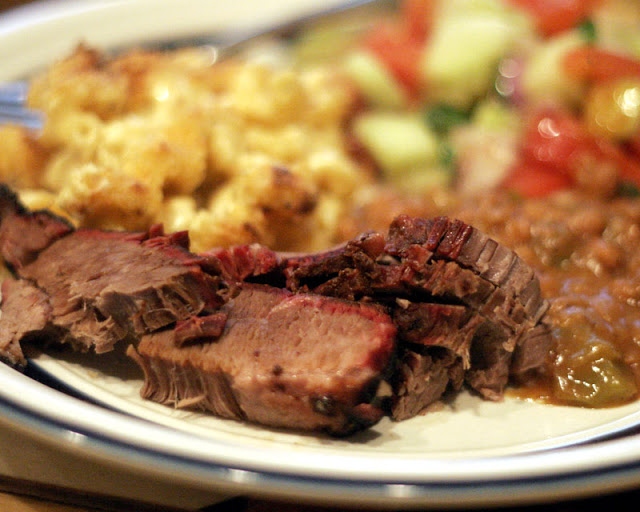 Enjoy! What’s your favorite barbeque side? Let us know in the comments!
Recipes are after the jump!