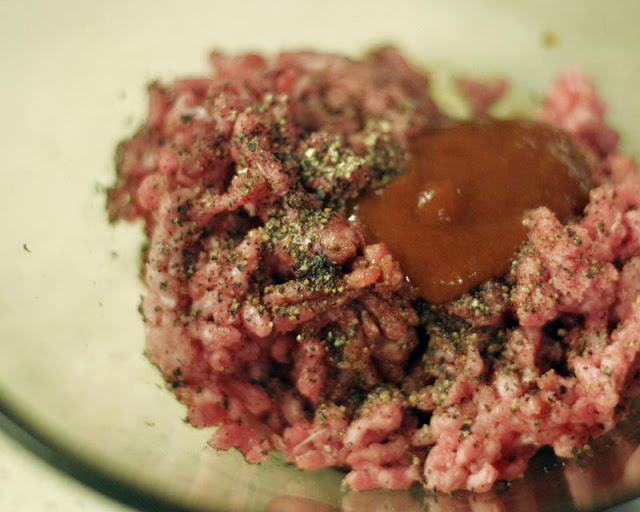 This is the transcript from the few minutes it took us to devour these delicious burgers. Inspired by the Ultimate Sriracha burger we found for last week’s weekend inspiration on burgers, we took it upon ourselves to try the recipe out (sans the swiss cheese and tomato), and served it up with a delicious side of pecorino broccoli.

The Burger
Start by forming up your patties. Combine a tablespoon of sriracha and a half tablespoon of soy sauce, as well as a generous portion of freshly grated pepper, into the meat and mix it all together. Once done, form into patties and let them rest, letting the flavors incorporate.

While those flavors are incorporating, get to work on your bacon and onions. In a non-stick pan fry up some bacon. Cook it low and slow so the maximum amount of fat renders out. You’ll need it.

Once the bacon is nice and crisp, set it aside on a paper towel to let the fat drain off.

Then, into the rendered fat, add in your sliced onions. Yes folks, that’s right, we’re going to be caramelizing onions in bacon fat for this recipe. Honestly, how could this not be amazing?

Sauté the onions over medium to low heat for about 30 minutes until they’ve reduced significantly in size and taken on a nice brown color. You’ll know they’re done by looking at them, but since you’ve been toiling away making sure they don’t burn for all this time, feel free to try one to “make sure it’s good”. Go ahead. No one will judge you.

With the onions caramelized and the bacon crisp, the only thing remaining to do is grill up the burger and make the sauce. If you have a grill, we envy you, so go ahead and cook the burgers as you normally would, to about medium well.

If you have a New York City apartment, take out your grill pan and heat it up nice and hot so that the burgers will sear nicely. Cook for about four to five minutes per side.

Then, and this is important – let the burger rest for about 7 minutes or so before doing anything else with it. Failure to follow this step will lead to soggy buns, or worse.

While the burgers are grilling, mix together your sauce. We’re going for about three parts blue cheese dressing to one part sriracha. Mix it together, and give it a taste. It’ll have a kick, that’s for sure, but don’t be afraid – this will go great on that meat.

Finally, toast up a bun. Slather some of the sauce on each side of the bun, and then construct your burger. The proper order for doing this is demonstrated above – burger, onions, bacon, and arugula. Yes, arugula – its got a nice kick that stands up well to the sriracha.

Making the Pecorino Broccoli
This is a very simple side dish but was incredibly delicious. We found it in Mario Batali’s Molto Gusto and though it would make for an excellent healthy side to an otherwise indulgent meal (see: onions caramelized in bacon fat).

Cut up the broccoli into small florets and then blanch in boiling, heavily salted water for five minutes. As soon as it’s done, run it under cold cold water.

In a mixing bowl, combine half a cup of freshly grated pecorino cheese with a touch of water and olive oil, and whisk until emulsified. Add only small amounts of water at a time, whisking throughout, so that a nice sauce forms

Then, throw in the broccoli and toss to combine. Let it rest for about 10 – 20 minutes to let the flavors combine.

The Result
The broccoli was a great side, but the real star of the show was the sriracha burger. Boy oh boy, this was delicious. The burger was juicy but with a wonderful kick from the sriracha and the soy sauce. The blue cheese sriracha sauce was divine, and the combination of the caramelized onions, arugula, and bacon provided diversity so that the sriracha wouldn’t be overwhelming.

Our take? Go make this burger.

A delicious, easy, and healthy side