The drop in temperature has given us license to run the oven for a few hours without suffering too much consequence, and this take on eggplant parmesan takes advantage of that beautifully and deliciously. It’s a “take” on eggplant parmesan because it’s actually more of an eggplant lasagna or, more simply, and eggplant bake.

Traditionally eggplant parmesan is slices of eggplants coated in a parmesan and breadcrumb crust, fried, and then baked with marinara and mozzarella. It’s actually quite a bit of work, and not super healthy. With this dish, you get pretty much the same flavors, with virtually no work, and a lot less of the unhealthy stuff. (That said, you still use a ton of cheese so we’re not going to say this is good for you… but it is delicious).

We were pretty exhausted from a long week of work and didn’t want to spend too much time cooking, so this was a perfect dish. We picked up some locally grown purple eggplant and graffiti eggplant and a ball of fresh mozzarella, and we were set. We already has some tomato sauce prepared from a previous meal – a great way to use the leftovers. But, you can whip up some sauce pretty quickly or use a pre-made sauce for a similar result.

Start by slicing off the ends of the eggplant and then cutting the eggplant vertically into 1/4 in thin strips. Toss the eggplant strips with some salt and let them set for about 20 minutes to draw out the water. While that’s happening, grate up your mozzarella or slice it into thin pieces. Try not to eat it all as you’re doing it. Preheat your oven to 350 degrees.

And that is pretty much the extent of the preparation. One paragraph. Not bad right? We promised this was quick and easy 🙂

Cover that layer with sauce, and then lay down another layer of eggplant, mozzarella, etc. Do this until you run out of eggplant or room in the baking dish. Just be sure that there’s enough sauce touching each piece of eggplant, since this is what cooks the eggplant.

Top the whole thing with a layer of the cheese. This will come in handy at the end of cooking when you have a nice golden crispy crust of cheese. Yummmmmmmm.

When the oven is ready, cover your eggplant parmesan/lasagna/layer/bake with foil and place it in the oven. Then, let the oven do it’s work. Let it cook for about 45 minutes at least, but an hour or so is better. The eggplant gets sweeter as you cook it.

Once you’ve cooked it for 45 minutes or an hour, remove the foil from the baking dish and leave the dish in the oven. Let it cook uncovered for about 15 minutes. This will give you the extraordinarily delicious, crispy crust on top. Can’t get enough of that.

When you’ve finished, remove from the oven and let is rest for about 10 minutes. The eggplant will absorb some of the sauce and the cheese will thicken slightly, so that when it goes on your plate it isn’t a big pile of goop.

Cut out a square, place it on a plate, and garnish with freshly grated cheese. Delight and enjoy!

The Result
Just look at that. Gooey cheese, delicious eggplant, tomato sauce. Is there really any better combination? You may as well be eating desert here, but you’re not. You’re eating dinner. There’s nutrition. It’s great. When there’s a cold wind outside and you’re tired and want something comforting and satisfying, this eggplant lasagna/parmesan/bake is the way to go. 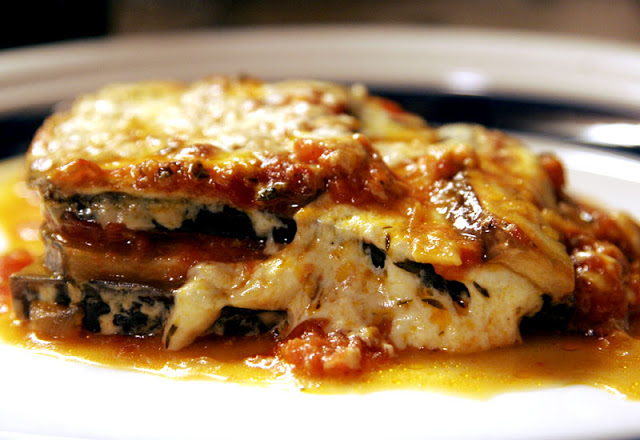