Lobster. Bacon. Potatoes. Corn. Is this list making you drool yet? I can’t really think of a more exciting combination. Independently, each of these ingredients are on YiRan’s “must eat” list. Taken together, they form an irresistible combination that, were it not for the priciness of lobster, would probably be the only thing we’d ever eat.

We made this lobster chowder from scratch for a special occasion and will likely be breaking out the recipe again for other days of celebration in the future. It is a luxurious and delicious meal, smooth, silky, and ultra tasty. Fortunately, it’s actually pretty easy to make too. Especially if you have the guy at the lobster store cook the lobster for you. So go ahead – make yourself some lobster chowder. You deserve it!

Also: We’re going to ITALY!! And we’re very excited about it. But we also want to make sure that we soak up the trip to its fullest. So if you’ve been before (or live in Rome, Florence, Bologna, or Venice), please let us know about what to do in the comments – we’ll really appreciate it! 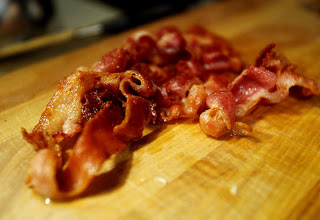 Start off by cooking your bacon in a large nonstick pan and cook it until the fat renders out and it’s nice and crispy. 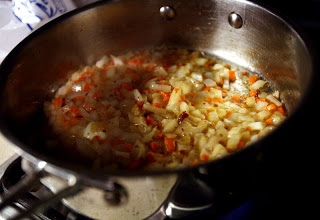 Once it’s crispy, remove it from the pan. Into the rendered fat, add the carrot, onion, and garlic and cook for about 8 minutes, until nice and soft. Add in a touch of salt while cooking to help the process along.

Add in the flour and stir to combine. Let it cook together. (You can see in the picture that I put in way more than the suggested amount, and therefore ended up making way too much chowder :))

After letting the flour and vegetable mixture toast for a few minutes, add in the lobster stock in a slow stream, stirring constantly, until fully combined. Add in the cream or half and half and stir to incorporate. At the end you should have a nice thick chowdery base. If you need to loosen it up a bit, add in a touch of water.

Add in the potatoes and bring everything to a boil. Then cover and reduce to a simmer, stirring occasionally for 10 minutes or until the potatoes are nice and tender.

Add in the thyme, cayenne, paprika, salt, pepper, parsley, and corn. Stir to incorporate, and then cook until everything is warmed through. To finish, add in the lobster, stir together, and warm through again. Finally, chop up the crisped bacon strips and add them to the soup, stir together. Then serve. And enjoy, immensely.